The NHF UK team converged from various corners of the UK and Europe in readiness for Alternative View 5, Ian Crane’s bumper weekend, packed full of alternative thinkers with positive suggestions for how to combat the ways of the world and all the mindlessness it entails.  We, the NHF UK, were given a table on which to place our wares, a kind of open office, to which any interested parties could come.  And come they did. It was testament to the fact that Scott Tips has numerous fans, who remember his wise words and sense of humour from year to year, for they came in their droves to devour information, purchase magazines, to meet the new NHF UK team, and to buy Scott’s seminal work on Codex in the form of his book.

Over the weekend we met like-minded NHF UK fans from all over the country, some who were previous associates, some who were aware of us but had not heard from us for a while and others who had never heard of us at all.  Here was an opportunity to declare the UK branch back in action, after a period of having lain dormant  (the previous NHF UK director Caroline Knight having headed off to start a new life in Vietnam…perhaps we’ll see a Vietnamese branch of NHF soon!). The new NHF UK team, headed by Emma Currie, were in meet-and-greet mode and also had the opportunity to hear Scott’s latest descriptions of the vibe at Codex; which countries were supporting good health, which officials were sympathetic, who had common sense at the Codex meetings, who didn’t, and which countries seem almost to have a eugenics agenda!  The crowd were aghast as they hung on Scott’s every word, do they really have a eugenics agenda?!  Scott was pragmatic, he has been in this game too long to imagine statements like that will stick and summarised, “Whether or not they have an agenda is neither here nor there, the end result is the same, people are dying from the contaminants allowed in the food chain and if they don’t die, they are certainly not being born, because fertility is down, down, down.”

The great thing about an event such as AV5 is the bringing together of like-minded people.  The conspiracy analysts of this world who are open-minded and who do not believe in the world as presented to us via the mainstream media and our government.  The AV5 delegates are conspiracy analysts and are switched on.  While there remains, at times, a degree of discrepancy between viewpoints, it is none the less a fact that everyone at AV5 was bonded by a common position: that we must be active. The NHF UK – AV5 – President of The NHF Scott Tips in Front of the “Ever Heard Of Codex? That’s Exactly What They Want!” Sign

So active we were.  NHF UK soon hooked up with a great team of activists who have been working in their own fields.  Pippa King, anti-fracker, on a quest to attain greater legislation to protect us from Electro Magnetic Frequencies (EMFs), Pippa is a campaigner working solo out of her home town, Hull.  Olga Raffa, from the Chemtrails Project UK who is creating a People’s Directive to challenge Geo Engineering and to claim back our blue skies; like many of us she wants answers from those in the know about why our skies have become…stripy…or chequered.  We also connected with Davinia McFarlane and her sister Michelle.  Davinia Works for NEAT, which focuses on women’s health issues, getting women from minorities into the clinics to support their health needs, raising awareness on health matters and running events.  Her sister Michelle works with WEN, the women’s environment network which makes use of disused spaces and transforms them in to organic gardens where locals have access to fresh food which they have grown themselves.  We also spent quality time with our friend and long-standing supporter Sylvia Gray, who works in the mental health arena; Sylvia is so plugged in to the alternative positions of life and is such an attractive bright person that when she makes a request to speakers and audiences to gather, they stand to attention!

The NHF UK team, which included James Harkin, Syed, Emma and Scott, skived off one of the sessions and gathered the above like-minded individuals to a table in the sun outside the venue and we talked.  And what a great talk we had!  Not only were we keen to let them know that their actions and campaigns can be carried out with our full NHF support, but we were also able to offer a central resource and the NHF name from which to promote their tireless efforts.  These warriors for justice are the sort of people we like and by the end of our meeting we had all of us decided that the NHF UK would run its own one-day event next year in London, likely MAY 2015, with the exact date to be established and of course we will let you ALL know in good time so you can put it into your diary and plan for it. Our NHF UK event will include our favourite speakers, some of whom have already signed up, such as Tommy Sheridan; he makes conspiracy analysis very funny whilst at the same time delivering amazing knowledge of history and all its foibles.  (NB this is NOT the Glaswegian politician of the same name, but the bright and affable Irish alternative political thinker).

It was a busy weekend.  Scott also ran a workshop event to give a Codex update and touch on nutrient information.  By the end of the weekend we were both fired up and exhausted!  It was a great opportunity also to show people the new website and to invite contributions, content, chat, events, notifications etc for all our members, associates and any interested individuals.  The NHF UK intends to be the sum of it’s parts and that means a voice for all of you health freedom fighters, so send us your thoughts.  Let us know what’s getting your [health freedom] goat.

[Photo to be added]

The NHF UK team works for no pay and it is our un-erring belief in the truth of the NHF quest and the respect we have for its values which keeps us hooked.  Do remember too that any cash donations you are in a position to make will be a blessing and help us to do more.

Apathy allows the current system to remain; it is oppressive.  Add to that bad food and poor health and the result is a dumbed down society and perpetuation of the status quo.  But it is uplifting to know that there is an ever growing crowd of bright, engaged individuals and campaign groups who are out there and who love what the NHF does and who want to join in.

Thanks to Ian Crane for organising AV5 and we look forward to an inspired NHF UK gathering next year, to which you are all invited. 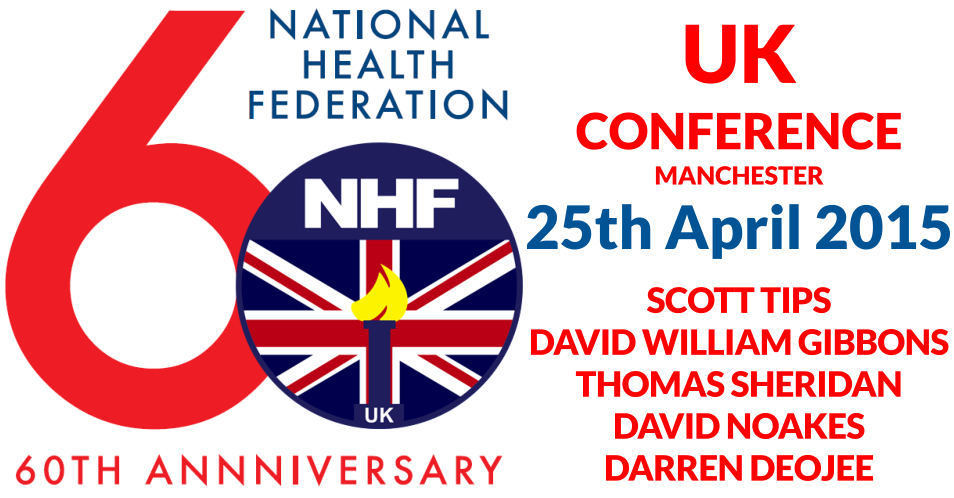 By Hermann Keppler Principal, College of Naturopathic Medicine As you may know, there are government plans to implement statutory regulation of anyone practicing herbal medicine in the UK. If implemented, this will mean that anyone Read more…